In the name of the father

My father. My idol. The best player in the whole world.

I remember that most of the time he wasn’t there. He was working.

However, he always knew what was going on. He knew about everyhting.

What I was doing and when I did it. We spoke on the phone everyday.

When he came back every summer I was full of joy. When he had to leave to work, I always wanted to go with him. Sometimes I did.

I am named after him. Greek people know my father. Now the time has come to know me as well.

My name is Steve Burtt Junior.

And this is my story.

Two generations in one photo: Steve Burtt Senior and Steve Burtt Junior. Blast from the past!

I grew up in a home, where you could easily find lots of basketballs. When you father is a professional basketball player, it is very likely to follow his footsteps.

They say that the apple doesn’t fall far from the tree. It’s true.

Since I was 8 years old, I was in love with the idea of playing basketball.

I grew up in New York, in a home with my mum and my grandma.

I was the kid who played basketball. People believed in what I did and supported me.

I try to dig deep in my childhood memories. And rembember which is the sweetest of them all.

It was when my father played in the NBA. My father was wearing the Phoenix Suns jersey.

I was so happy.

Of course I visited him. It was the Easter break, school was out so I went to Arizona.

It was the coolest thing that I have ever seen in my life.

My father lived in a huge house. And he played in the NBA.

At some point, I had the chance to meet his co players. I even saw one of their Play Offs game, versus San Antonio Spurs.

It was unbelievable. I spoke to the players that I used to watch on TV. I went to their immensely big houses with may father.

The truth is I had the chance to meet my second favourite player, Kevin Johnson. Before meeting him, I had even planned what to say to him. But when I saw him standing before me, I froze. All I could whisper was ‘hi’ and nothing more…

This story has a funny side. You know, my father will always be my favourite player. The best in the whole world. My role model. My idol.

Kevin Johnson was my second choice. I loved the way he played. Passing the ball, shooting…

My father was jealous of that choice, but he never said anything to me.

Ever since I was young I used to travel with my dad. My first trip was to Israel.

It was shortly after his playing days in Greece for Iraklis BC.

I know the story. I know that in every game he used to “kill” every opponent. I know about the mistake that he made. It is somethine that we have never discussed. He wanted to leave it behind. To go on playing basketball.

To do the only thing that he loved.

Years later, like my dad, I also came to Greece. Who knows? Maybe it was fate. To fulfiil, in a way, what he started.

Maybe I even end up my career here in Greece.

Basketball is my life. I have always loved it. Still do.

Whenever there was a challenge I accepted it. Even in the age of 34 years old, I still learn. The beauty of it is flawless.

Only one time was I ready to give up. When my grandmother passed away.

She practically raised me. She was everything. She still is.

I play for her in every game. I have her name on my shoes to remind me of that.

My dream was to become a professional basketball players, so I can take care of her.

When she was gone, everything was lost. Even my motive to compete was gone.

It was in 2006. I learned about it while I was playing with Charlotte Bobcats in the NBA’s Summer League.

I left immediately and I came back after a few days.

When she was gone, everything was lost. Even my motive to compete was gone.

I was in denial, but that did not last for long. I thought that she wouldn’t want me to react that way.

I found a new motive. New energy. From above! She guides me now.

It was then that my journey began.

It will be wonderful to stay in a team for 5 or 6 years. To become my home. But, man, you live only once. I exprerienced things that I can tell my kids and my grandchildren. It’s beautiful. I can show them all of my jerseys from the teams that I have played basketball.

In one of my journeys, I ended up in Israel. Again following mny father’s footsteps. I was playing for Ironi Ashkelon.

A town just ten minutes away from the Gaza Strip. The experience was awesome.

I did not witness any explosions, rockets or violence.

Only once I saw the remains of a missile and another time I heard the sirens and we had to go to safe places. Which again was shocking.

The team made a great effort to keep us safe. I stayed there for two years. I knew what I had to face.

But most from what I had heard was exaggeration from the Media.

I have an opinion about the Media, but I won’t share it with anyone. But if you haven’t witnessed something, you mustn’t have an opionion.

Every place has its own issues.

I have grown up in New York. This has taught me not to be afraid of anything.

New York has offered me a lot.

It has prepered me for any difficulty that I would face in my life.

My father made sure that I would be ready for what would come after.

He used to advise me. Now that I have grown up, he does that only if I ask him to.

He went through a lot growing up. He is full of experiences, he learned a lot of things from difficult situations and he wanted to share all that knowledge with me.

He grew up alone and life taught him everyhting. His folks were never there.

Because of that he made sure that his son wouldn’t have to go through the same things as he did.

Now there is nothing that I am not prepared to face anymore.

I still remember when we were discussing my decision to go after my dream of becoming a professional basketball player.

My dream of becoming like him. He used to tell me that if I chose that I would have to live it!

To respect it and love it more than anything else. Otherwise, he had told me, not to get involved.

You see he was an athlete. And he was in love with basketball. To him it was something more than just a game.

He didn’t force me to play basketball. I know that if I had chosen something else he would have supported me.

I have watched him playing basketball since I can remember. In the NBA, in Europe…

I even lived with him for a few years in Italy. I went to school there.

He taught me a lot of things. I also learned some things on my own. It has become my nature.

How long will I be able to go on like this? Until I can’t anymore.

Crete is a beautiful and peacefull place. Exactly the way I like it. I don’t like to party and at my age having some rest is very necessary.

I will stop only when I want to. It won’t be when I won’t be able to. I feel wonderful. Nobody expected that I would be so persistant, but I am. Not all people can do that. I put energy in my body to keep up. Every day. I want to play.

I will be a basketball player, until I cannot be anymore. Just like my father did. 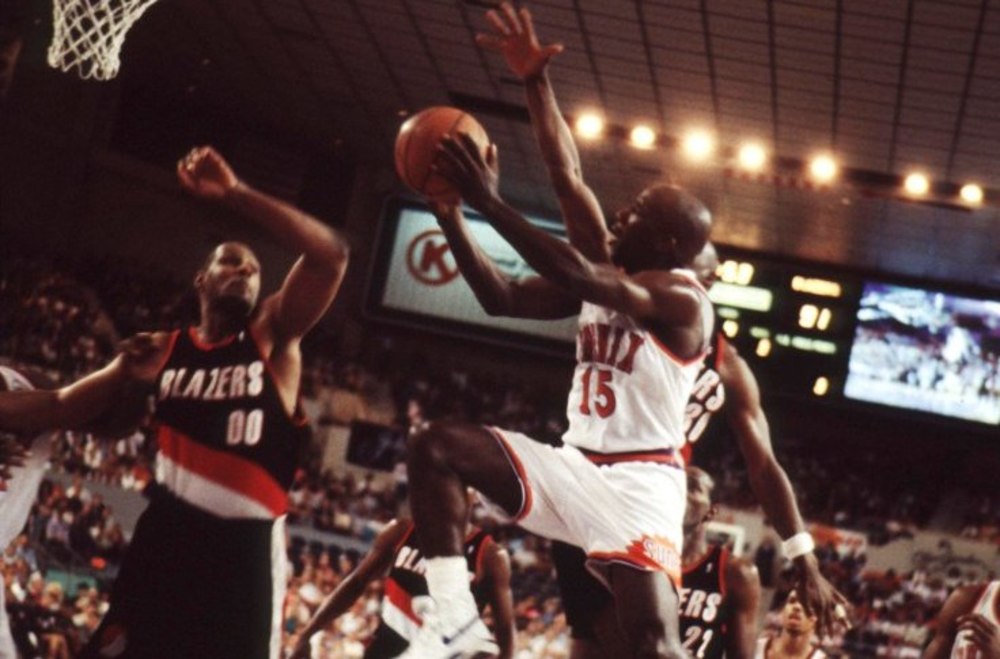 Steve Burtt Senior in action, during the Play Offs, versus the Blazers.

I remember he had gone to play in Turkey. He came back very soon. After almost two months.

We didn’t talk about that, like the way we would now. It was more a father and son chat. Not between two friends, like now.

He explained to me that he would never play the game again.

Both emotions simultaneously. My hero would never play basketball again. “But he would spend more time with me”, I thought.

It was something new in my life.