My agent, Paul Koutsoliakos, called to tell me that there is an option on the table but with less money than the previous one made by the club two years ago. It makes sense since my contract with PAOK was entering the final year. The bargaining begins, as time presses.

Saturday morning, I was told that the talks continue, but nothing close to an agreement yet. I get up and I drive to the training center as usual. In the afternoon I return to the hotel. I have to relax, the next day, we had a match against OFI Crete for the championship.

The only people I ‘ve talked to about my transfer option are my parents, my girlfriend and Dimitris Giannoulis.

«Giannou» was my roommate. We are close friends; we tell each other everything. I told him about Fener, we discussed it. A few days were missing for the transfer window closure, a period which is sometimes crazy. I knew Dimitris was going to understand me, because at this period he had a burning issue too. He was in the middle of talks for a transfer, he had a specific offer by a foreign club; he has already been through all these…

Saturday night and still all bets are off. Talks, talks, talks but the two clubs could not reach an agreement. There was a slight mess and if you consider the time pressure for both sides, you can figure out what was happening…

I am still waiting to hear and understand what’s really going on. I am in a position where I am aware that I can’t do anything by my own, the situation is out of my hands anymore. PAOK and Fener inform my agent, Paul calls me and hesitates. Anything can happen in any moment now.

It’s Sunday morning and everything is still at risk. I have so many questions, I”m waiting for a notice, I am looking for a clear answer. First Paul reassures me that everything will be done, the deal is closed, Fener will send a private plane to get me to Istanbul ‘coz there’s no time left and we have to do it that way, because of covid restrictions. Half an hour later, insists that the deal is off, PAOK and Fener are far away from an agreement, no one is backing off. This craziness within minutes, a complete madness.

It’s already time for the match against OFI and I’m trying to concentrate and get ready. The team leaves for Toumba, I receive a text «the deal isn’t going to happen, it’s off». As we arrive at the stadium, I decided to call Paul for a last time before the game. «Dimitris, we were close but it’s not happening». So be it! There are moments you have to man up. My fate is to stay in Greece.

Dimitris Pelkas in his last appearance with the PAOK jersey, before his transfer to Fener / Photo by: Eurokinissi (Motion Team).

I’m starting against OFI, but mister calls me out 20 min. before the final whistle. I’m in the locker room, I look at my cell and I read a new text: «It’s over, it’s done, get ready, we are leaving asap». I drive home immediately, I call my girlfriend, then my parents to announce the big news.

Everything is in fast forward mode. PAOK reached a deal with Fener, I’m going to Istanbul! My phone rings again. It’s an incoming skype call. It’s the president, Ivan Savvidis. I’ve always been in good vibes with him, Savvidis knows how to break the ice. He started the conversation saying «İyi akşamlar», «good afternoon» in turkish. «You have to learn it fast. That’s how your conversations will start where you ‘re going» told me. The vibe was really good. He explained that PAOK finally conceded the transfer, since I expressed my intention to do so.

01:30 am, in the middle of the night we flew to Istanbul. There was no time to lose. When I arrived, I went straight for ergometrics. They waited for me that late! Everything had to be done … yesterday, time was really out of hands. No time to sleep, I hadn’t slept at all. After the test we went straight to the headquarters, we waited for the document exchange, all the paperwork. I rest for a couple of hours, at noon I had to be ready for the official announcement. Finally, I am a Fener player.

I didn’t have time to say goodbye to anyone back in Thessaloniki. Everything happened in a spark of time.

It's not a goodbye. It's see you again #TheJoker. Thank you for making PAOK Academy kids believe that dreams do come true. #PAOK #RiseUp Dear @Fenerbahce please take care of him. pic.twitter.com/dquIWTysLZ

it was the most weird week of my life. On Thursday, we had a small gathering, something like a goodbye dinner. On Wednesday, I went to Nea Mesimvria, PAOK’s training center, to salute everyone. Some surprised, but most of them already knew it. I tried to talk with everyone, I called those who were missing.

You know, it’s not easy to realize that the greatest football chapter of my life was over and I had to start over new. Since I remember myself, I am related to PAOK. I played for PAOK as a kid, I made it as a professional, I grew up as a person and as a player, I almost tasted everything – gosh had lived everything.

I’m impressed I blended in so quick to Fener. Maybe it’s my character. I am a quite extroversible, friendly and social guy and, as cliché as it sounds, with my new teammates we have a common language. Football.

I was lucky to find some people who had experienced the same transfer-madness with me, they knew exactly how I felt during my first days.Everything started to be so familiar to me, I just wanted to play football, to get to know my teammates in the pitch, to “introduce” myself in football terms. In a new environment, as soon as anyone realizes that you are neither an introvert type nor a troublemaker, everything will work well.

A whole group of people was willing to help me. This city helps too. The rhythm of life, the reactions, the feeling everywhere. I always thought we Greeks were close to  the Turkish people, our behavior, our mood, the mentality. The only variant I couldn’t expect was the coronavirus peculiarity. In Turkey things were different, shops and everything remained closed during weekends, from Friday late night till Monday morning everything was closed.

On the other hand, from my first strolls, I was receiving recognition from the fans. However, the best thing that happened to me wasn’t in Istanbul but in Thessaloniki. We were on break for a National Team game, I was out for dinner and a group of fans started to greet me. My first thoughts were the obvious ones. They were PAOK fans, I’m in Thessaloniki. As they approached me they started shouting chants in Turkish! They were Fener fans, they recognized me and wanted to show their support and appreciation. I felt very special, it was outstanding.

I was already informed that Fener has more than 30 million supporters. It’s really flattering play for a crowd like that. I realized what that really means when we travelled with the National Team in Spain and Belgium. There were Fener fans everywhere and everybody wanted to salute me, to take a picture with me, it’s special.

I consider my first year at Fener one of my bests in my career. Not in numbers, nothing is only numbers. I’ve scored more goals, I had more assists in some previews seasons, but in Turkey the championship has a greater difficulty level than the Greek League, it’s very competitive. This makes my first season good.

First year at Fener has been a blast. Proud to play for this amazing club. The best is yet to come! 🟡🔵 #YaşaFenerbahçe #DP14 pic.twitter.com/ZFeCGJd98q

If we have managed to win to championship it would be the greatest season of my entire career.

Last year’s championship in Turkey was … incredible. At first, whenever we weren’t getting a result, I was going crazy and my teammates who knew the championship, were telling me to be calm. «Everything will be decided on the last minute, we still have a long way to go», they were telling me, because those who were experienced, had been in similar situations. And -eventually- they were right.

Till the end, everything worked well. Those five matches were staggering. We are talking about thrillers, situations that literally blow your mind. While we had some bad results, within a few matches we were on top again, fighting for the title.

We reached the point where we could be the favorite, we had to win one home-game. We lost, Besiktas lost, and Galata also entered in the battle. At the end, one goal decided the whole championship.

There are things you know you should do, things you tell yourself to do, but you don’t do them because you ‘ve never experienced them before.

Every question has an answer, every situation has a solution. You have to grow up, man up and do what you have to. 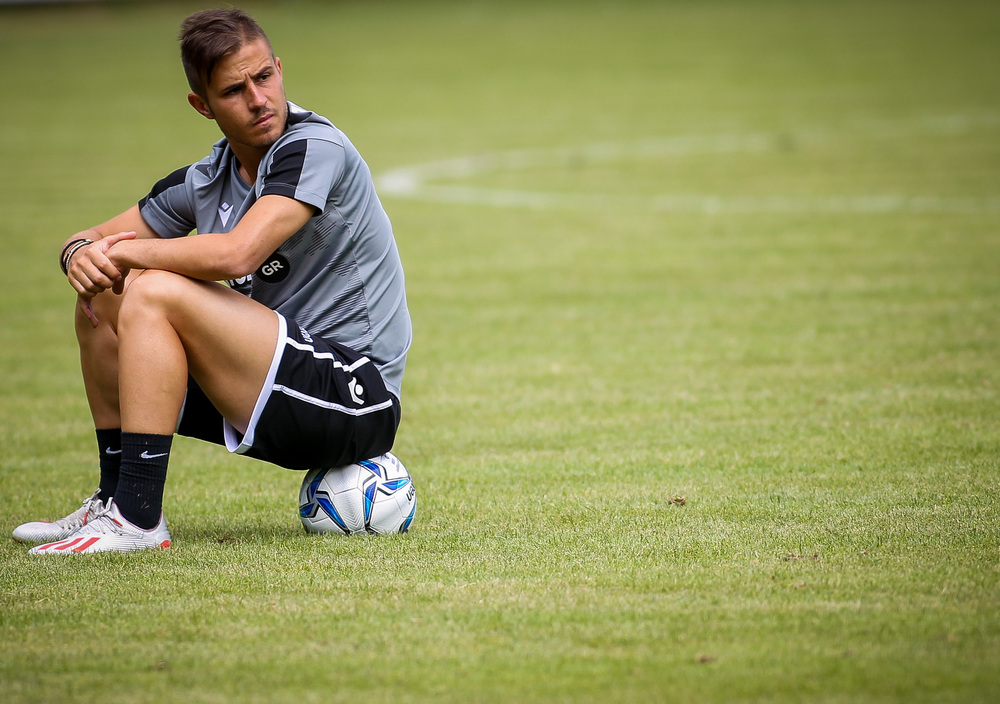