The bomb next to me…

Do you actually want me to say something more?

Is there really anything else to be said?

War brings images in your mind that you can’t forget. It brought me memories, stories and, especially, a lot of questions.

My family and I were already in Canada.

But as a little child I had to face the war in Bosnia.

My parents were brought up in Sarajevo. My grandparents lived for many years in Montenegro.

During the war in Bosnia, in 1995, we were living in Sarajevo and my parents decided to move back to Belgrade, after they bombed the house next to ours…

Picture from the bombings in Sarajevo, in 1995 / Photo by: washingtonpost.com.

I was two and a half years old.

I really don’t remember many things.

My first real live memory is back in 1997, when we moved to Canada.

All the things before that are very shaky.

What I truly have as a memory is that I was afraid.

My parents told me afterwards that I couldn’t hear well for a few weeks and that I wasn’t try to talk too much.

Growing up, I wanted to learn details about the war.

My family, living in Canada, tried to protect me from memories like these and that was a good thing.

The best thing in this situation is to let the kid make the questions, if he wants to.

Learning that my father went to war, obviously made me want to talk about it. Even I he didn’t.

My dad wasn’t at home most of the time my mother was pregnant to me.

He was at war for three or four months.

Members of my whole family were in the war. They had no other options.

The whole city was in the line back then… 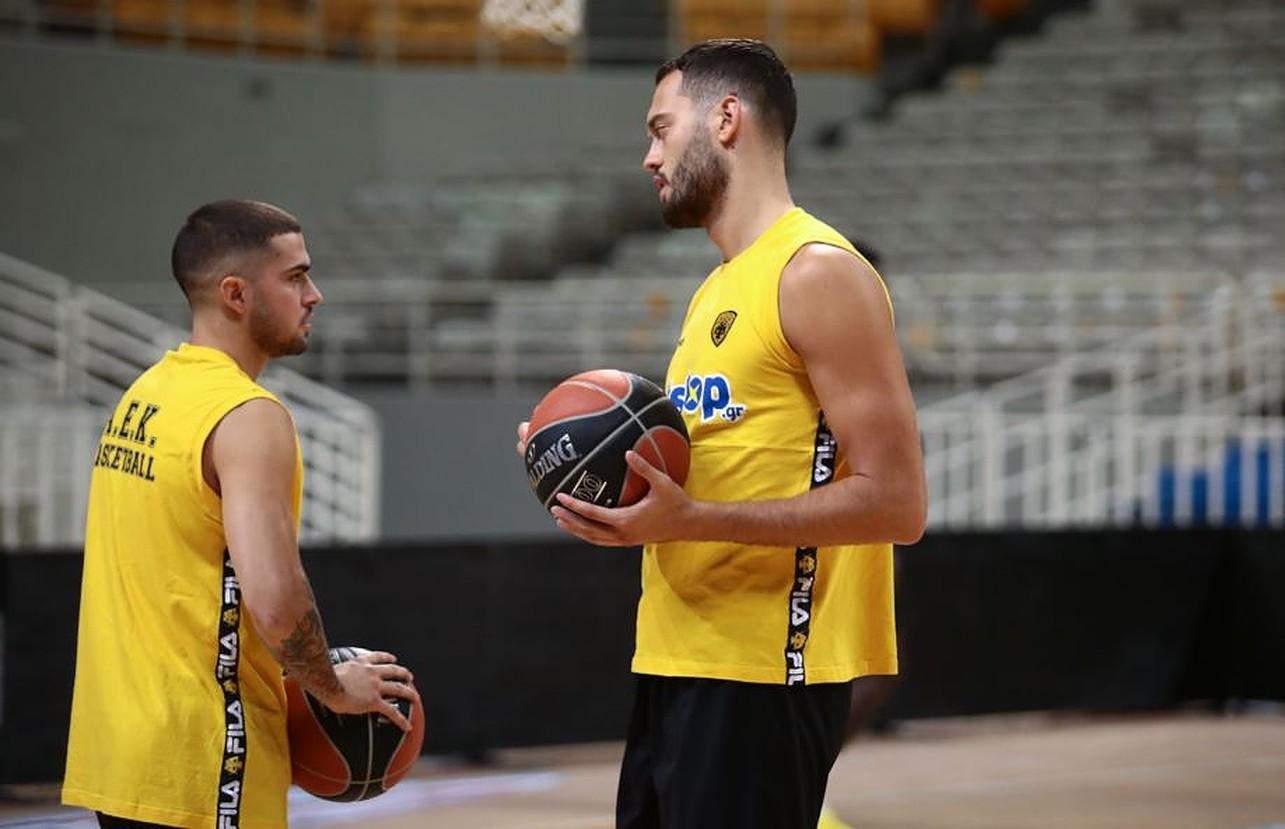 Stefan Jankovic (right), with his teammate in AEK BC Athens, Vasilis Toliopoulos / Photo by: Eurokinissi.

My uncles had to be in the line.

Kids, just 16 or 17 years old boys picked up weapons, instead of books.

No one likes this. It’s something that it’s not supposed to happen.

It shouldn’t have happened.

I soon realized that my father doesn’t like questions about the war.

But I tried to talk to my mom.

It was a crazy time for my family.

For two or three years all we did was travelling around.

Travelled to Bosnia, to Belgrade and then back and forth, during the breakup of Yugoslavia and the general instability.

We didn’t have enough money.

My mother once told me that an uncle of mine was sneaking to Bulgaria to get food and diapers for us.

You can’t explain to a kid why this is happening.

That was my early life.

Crazy and difficult times for all of us.

I now have a normal life and I am grateful for that.

Sometimes I think about these days and what I learned from my parents and realize that even if it’s almost 25 years ago, it’s not that far away.

As soon as all ended, now we all can move forward, but not forget all the lives that are gone.

My parents still live in Toronto.

We moved there when I was four and I lived my half life in this beautiful place.

My family travels to Serbia in the summer, to visit relatives that left behind. We have a huge family. I can count more than 500 relatives!

My grandmother is one of nine siblings and each has five or six kids.

My dad decided to go to Canada back in 1997, because his brother was living there.

I stayed ten years in Toronto and ten in the United States, to go to school and play basketball in high schools and college.

When I moved back to Belgrade, to play for Crvena Zvezda and then for Partizan, I tried not to bring my few war memories with me.

I wanted to “discover” my city from the beginning.

You know, it has always been a great place.

Going there in 2017, I wanted to learn about its new culture.

In my opinion, nothing there is good or bad and true or false.

It’s just war. A war between people of one big country splitting in seven smaller countries.

For many people, this is b……t!

Too many people died, perhaps for no reason.

Obviously, growing up, many like me have an opinion even if they hadn’t lived the situation.

I still ask my parents when I read or hear something about the breakup of Yugoslavia.

I was a baby and can’t remember all that stuff.

Even a few weeks ago I called them to ask.

You learn new things every day and you want to make sure that you should to try to find the truth in it.

At least, most of the truth.

But leaving in Belgrade for two years helped me to learn a lot of things.

It was really interesting and loved the culture.

In the red and white jersey of Crvena Zvezda / Photo by: mondo.rs.

Living at the other side of the ocean for so many years, everything looked so different.

Here in Greece you faced the crisis.

Now that I am here in Athens I can learn things easier about that topic.

The information “travels” fast, but if you don’t visit a place you can’t be sure what is true or not.

Canada was much different.

All these big restaurants, all these languages and cultures, gathered in one place and giving you the chance to choose for yourself.

I consider myself lucky because I have roots in so many places.

I was born in Serbia, my parents lived in Bosnia, their parents came from Montenegro and I grew up in Canada and America.

I will always appreciate the opportunities that Canada gave and still gives to my family.

I played high school basketball in Ontario, in West Virginia.

I played college basketball in Missouri, in Hawaii.

I played in the G-League in the States.

I visited a lot of places and I loved every culture.

I try not to forget.

I try to learn as much as I can.

Life and basketball offered the opportunity to consider many places as “home”.

And made me have in mind, without any prejudice, something real simple…

War is a terrible thing. Even if you only have memories and not any wounds.

Stefan Jankovic is a Serbian basketball player who plays for Tsmoki Minsk, in Belarus.