In the summer of 2018, I visited East Africa to work on learning the language, exploring the culture and meet new people.

In the end, I didn’t get to do too many tourist activities because what I enjoyed most was walking around and talking to people.

The place I enjoyed most on my travels was Zanzibar, a small island off the coast of Tanzania.

This is where I fell in love.

As I began talking to people it became clear there was a separation between Zanzibar and mainland Tanzania.

Outside of the capital of Zanzibar, Stone Town, there was very few opportunities to receive an affordable and good education.

As the island had more hotels pop up, the large franchises were mostly hiring mainland Tanzanians which increased the cost of living and also made it more difficult for local people to find work. 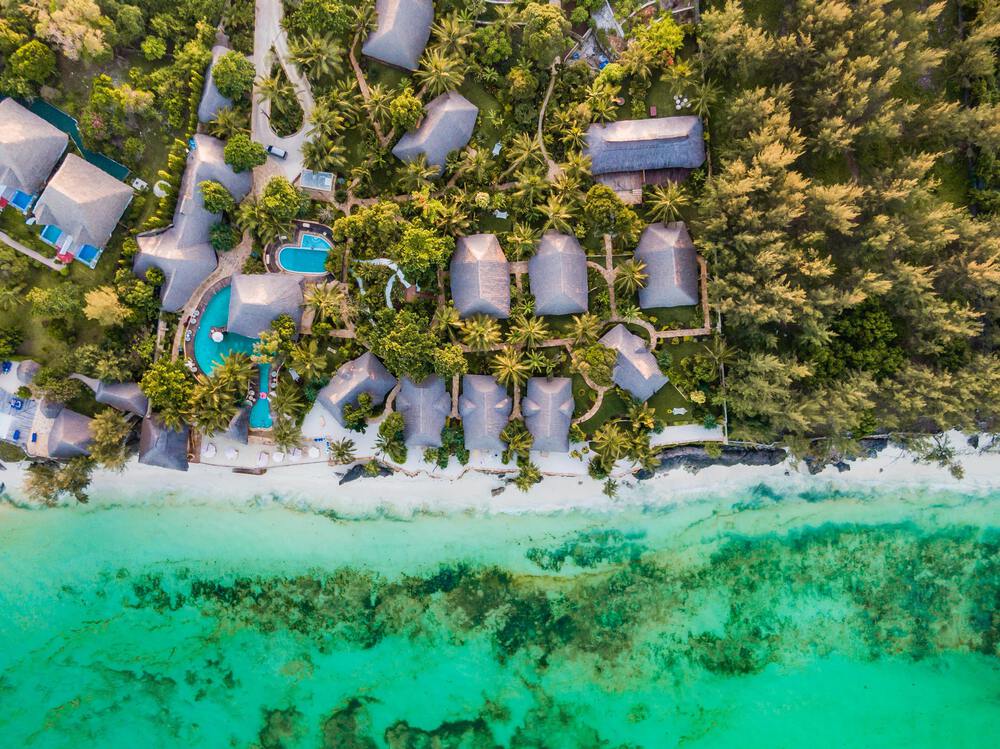 Fast forward to the next year, during my first professional season in France, and I sit next to Athina the first day of practice.

At some point, we began discussing our plans for summer and Athina said she would love to go to Africa.

We soon realized that we could use our trip to make a difference in the lives of students in the northern part of Zanzibar -a place where classroom sizes are overcrowded, and funds are limited.

We began planning and after months of work it was time to take off to the island.

We rode with a driver named Rasta from the airport to the northern town of Nungwi.

On a map the drive doesn’t look complicated, but as you pass Stone Town and the main surrounding city areas, the road becomes bumpy.

“It’s an African massage,” Rasta would joke, while I was being thrown back and forth in my seat from the holes in the dirt.

As we passed villages, spice farms, fruit farms and all sorts of kids walking to school, I felt excited to be a part of a community that was so in touch with their environment.

It also made me sad that this environment wasn’t allowing everyone to flourish. 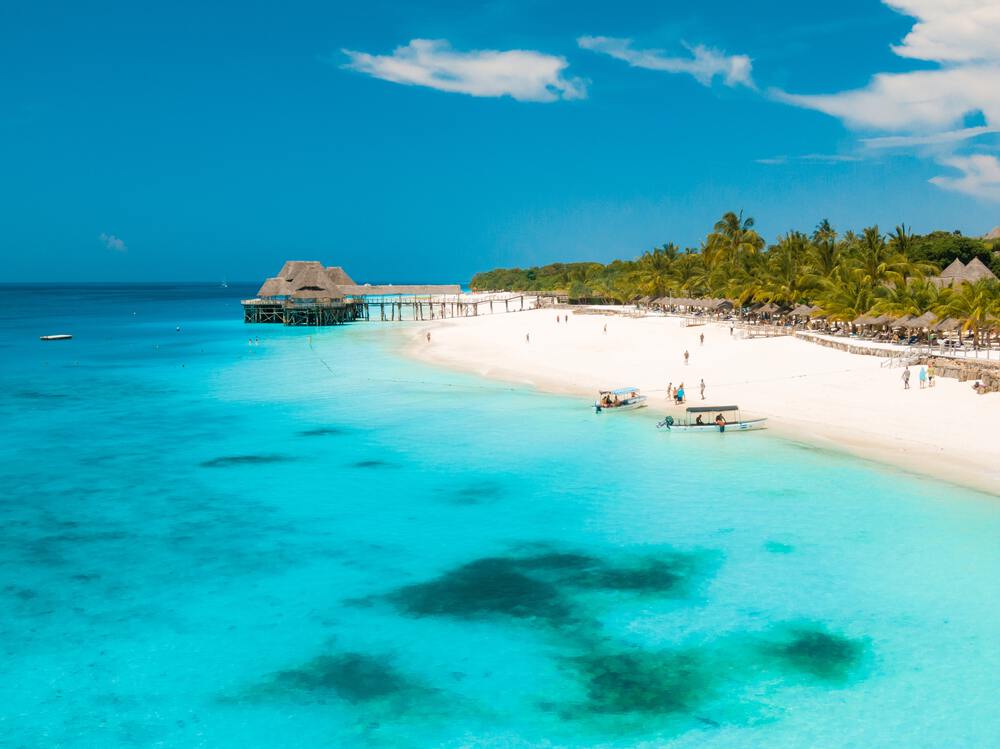 Our hope and plan was to create a sustainable response to what the school lacked based on the needs of the people in Nungwi.

We wanted to be open to changing our plans as we began to immerse ourselves in the community and to adjust what we did with funds based on what was most needed.

For example, as we arrived, we realized the school was having a water shortage and immediately made a plan to spend more of our donations on water.

This led to an instantly good relationship between the school principle, Coco, and us.

We all had the best interest of the children and community in mind and from there we could have some fun!

Each day we walked to the school for an 8 a.m. start.

As we strolled past the homes, Nungwi was already coming to life.

In fact, sometimes it appeared we were late risers as we saw women already washing clothes, cooking the next meal and the men coming in from fishing boats.

The rooster next to our accommodations each morning reminded us that we were never the first awake.

Next to us walked our students -holding our hands, pushing each other and running through the streets to the classroom. Once they arrived in the building, however, the chaos was (slightly) calm.

The students stood in neat rows, besides a few outliers who were scolded back into place.

Dozens of kids practiced their morning rehearsed English, did some choreographed dances together and listened to what their teacher had to say. 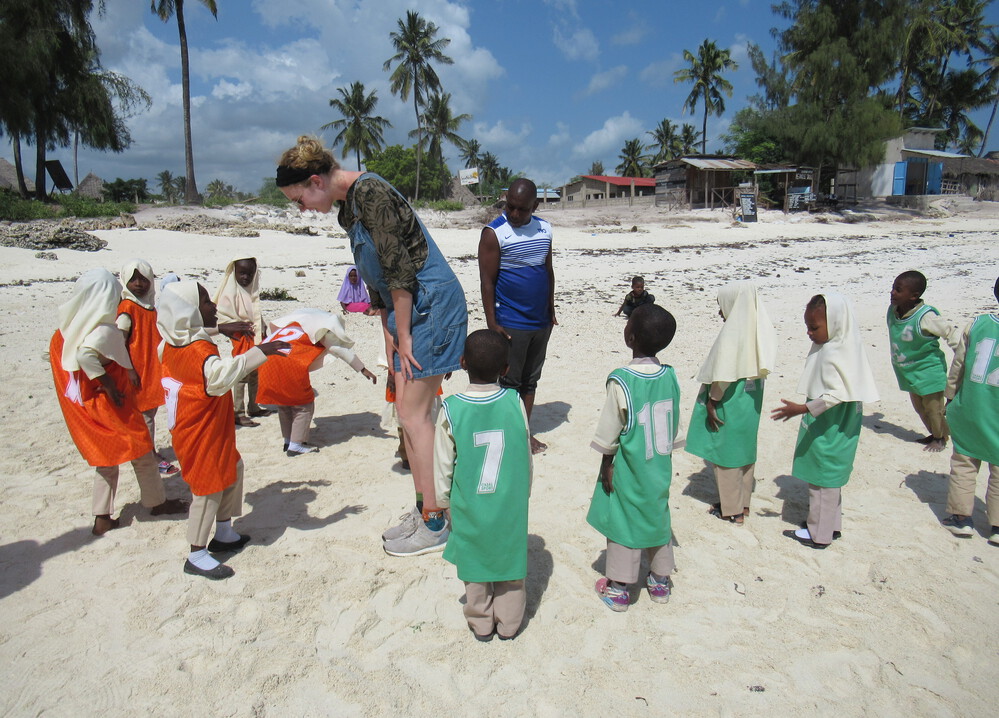 There were so many students and only a few teachers. Sometimes the teachers would go without pay in order to assure that the students had food to eat and classroom supplies for learning.

Even with all their sacrifice, it still made the learning environment very difficult.

There were so many students in the classrooms and the teachers were responsible for copying the homework into each child’s notebook because there were no paper supplies.

This took up a great deal of time after each lesson.

The plan Athina and I came up with was to take students outside in groups of 15, which took care of a large group of children to give teachers more control of their classroom. 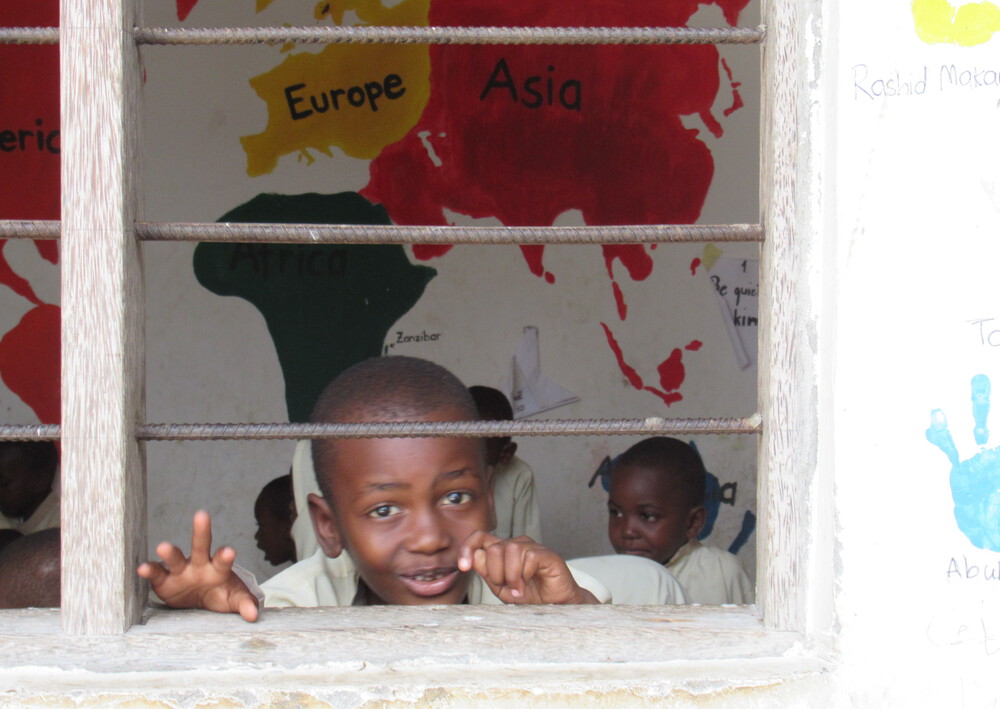 Once we took the children outside, our plan was to teach different sports.

The freedom to play is something Athina and I have both greatly benefited from.

Sports has given us the confidence in our everyday lives that we couldn’t have dreamed to have otherwise. It teaches teamwork, discipline, healthy living and mostly the ability to run freely.

We had a teacher with us, known as Mr. Yoga, who was a Nungwi resident and was able to bridge the communication gap.

On our trusty team was:

Me: an American with intermediate Swahili skills, volleyball experience and a love for humanitarian assistance and community growth.

Athina: A childhood education degree, international sports experience, a way with kids and ability to understand people without speaking the language.

Anteia: A curious and open-minded photographer. Someone who connects with students and locals easily.

Dimitris: Has fun everywhere and with anyone. A professional at lifting kids (who waited in a line for their turn) and able to run the fastest in tag.

With this group of people, we had so much ability to focus on the development of each student. 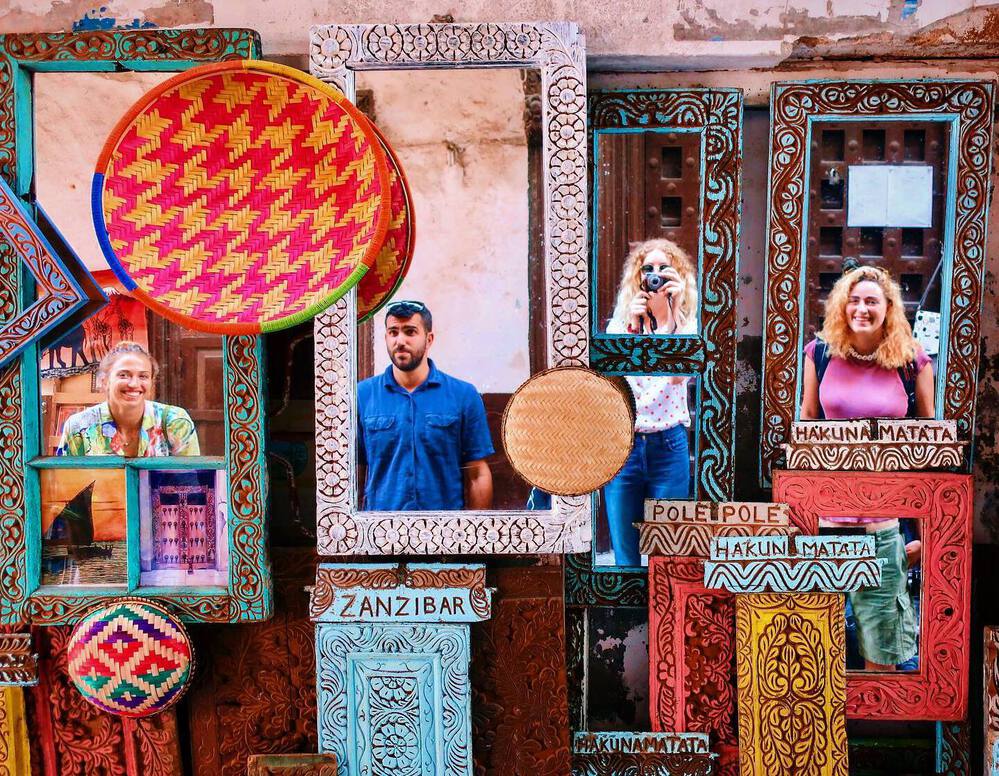 The classroom experiences the children were used to doesn’t provide a lot of room for individual attention -this was not only a chance for each child to learn something new, but to receive high fives, praise and attention from all of our coaches.

We did games that on the first day seemed nearly impossible, and sure enough with Athina’s educational background with children, she knew they would get it eventually.

In just days’ time we would see growth and development.

Of course, there were many moments where lots of students would run off to chase a ball or play tag and it was impossible to control our group of active and eager children.

In those moments, sometimes we decided to give up control and agreed to have fun.

Soon we realized if one of us started running (especially Dimitris), the students would follow. It allowed for some freedom in our lesson planning.

The ability for us to blend and run with the students made them more eager to listen and follow when we did more structured learning.

Our students were most excited to put on the jerseys that were donated to us for the project.

Jerseys helped the kids learn colors and numbers as well as provide the excitement to feel like a star player.

On the littlest students, the jerseys looked more like dresses and as they ran around the field it was one of the cutest things to see. 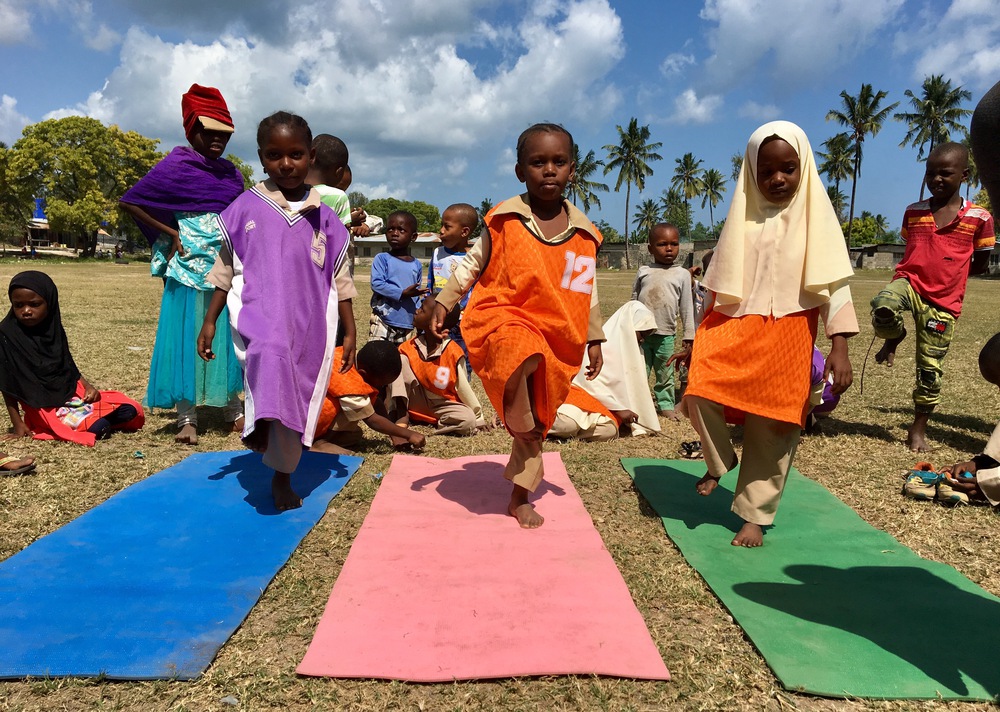 After a day of practice, we would go to a local fruit seller and buy bananas and oranges for our group of students.

This was great for the local food producers, our student’s nutrition and us (we get hungry too from running all day too!).

As we walked back to the school, holding hands with the students and passing Nungwians, we said the usual “Jambo,” “Mambo,” and “Vipi,” to everyone we saw.

It became clear that after a week or so, not only were our students beginning to trust and remember us -it was also the community who had begun to invite us.

After school ended in the afternoons, we would go back to our guest house.

It was a humble accommodation that allowed for an outdoor area to sit and hangout.

We often took this time to plan the next day of school and decide what we would do for the rest of the night and dinner.

Walking along the beach we would make friends and even found a great group of people to play volleyball in the early evenings.

My favorite thing about Zanzibar was that no one is too busy to talk to you. Everyone spends so much time getting to know their community and slowing down their interactions.

We met fisherman, boat operators, students, hair stylists and people from all walks of life. 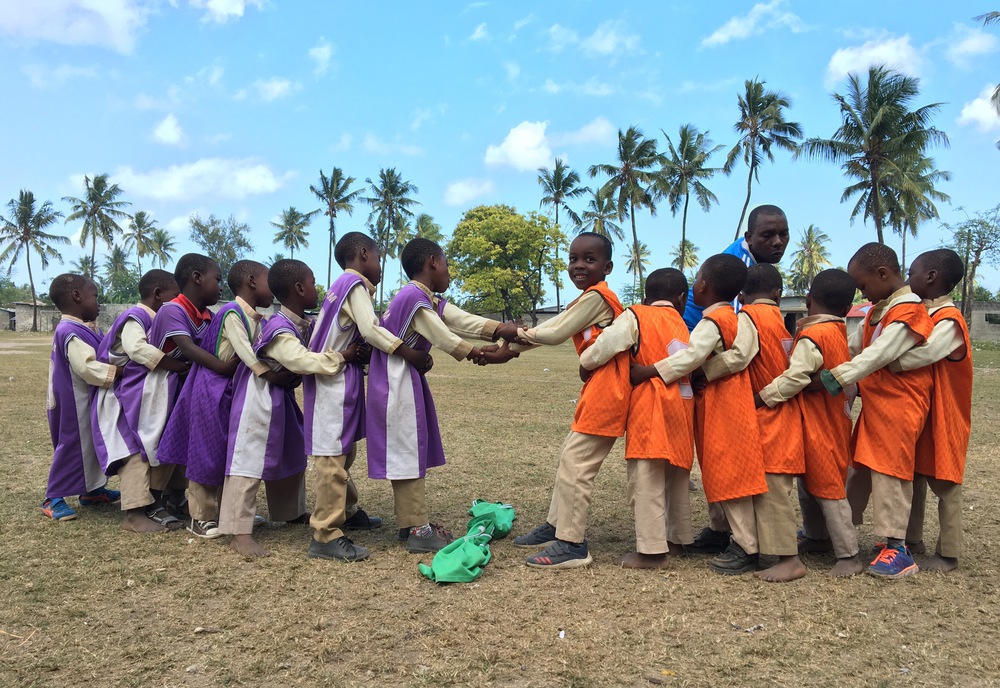 During our days at the school, we spent time on volleyball, football, basketball and other sports games that rely on teammate skills and following rules.

Maybe we’re biased, but it seemed like one of the clear favorite games was learning volleyball.

When we set the net up the students patiently waited in lines to try and bump it over -each time celebrating when it went the way they wanted.

I began remembering the first time I formally tried to learn volleyball. It looked a lot different -I was in a gym in Michigan, USA.

There was air conditioning, coaches with clipboards taking notes, and parents watching in a row of bleachers.

Here, we had a net tied to a tree, palm trees in the background, a dirt ground and animals wandering.

But it wasn’t really that different at all.

The enthusiasm, ability to experience growth, the drive to learn and excitement when you get the ball over the net -it was all the exact same way I felt. It reminded our small group of friends why we decided to do this project in the first place: a strong belief that your geographical location should not limit your opportunities for creative expression.

This past year we couldn’t go to Zanzibar because of Covid-19.

We’re missing our students and the feeling of change that can happen when you set your mind to something.

It gives us more time to make the project bigger and better.

It allows for us to plan for something great. 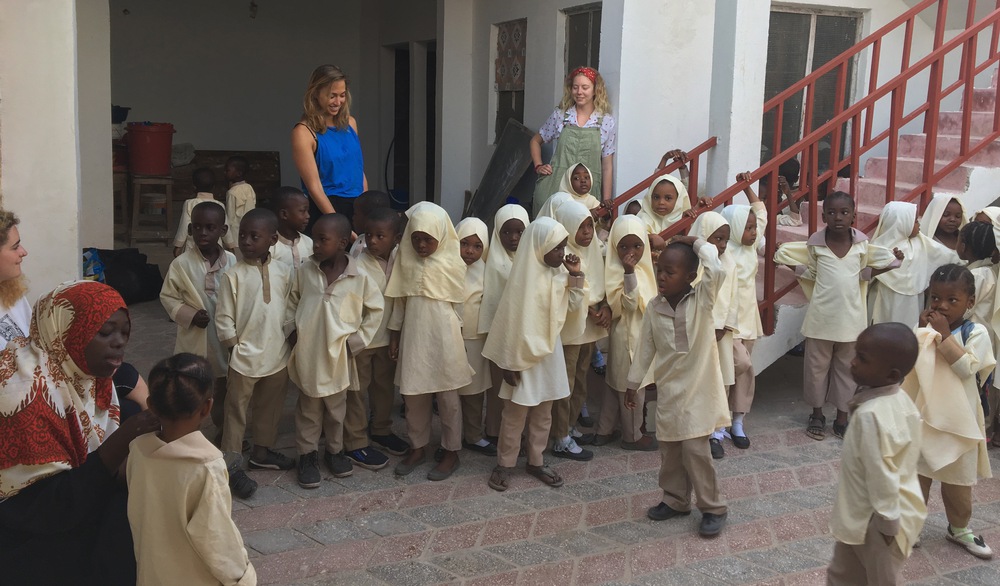