Too young to leave…

Much too young to leave.

I was at work when I got the ESPN update on my cell phone.

“Roy Tarpley dies at the age of 50, in Arlington, Texas”.

The next day, a few reporters and ex-teammates from Greece sent me messages as well.

I was very shocked, as he was only one year older than me. Much too young to leave…

Roy was a good friend and teammate. We played together in Olympiacos for the 1993-1994 season. 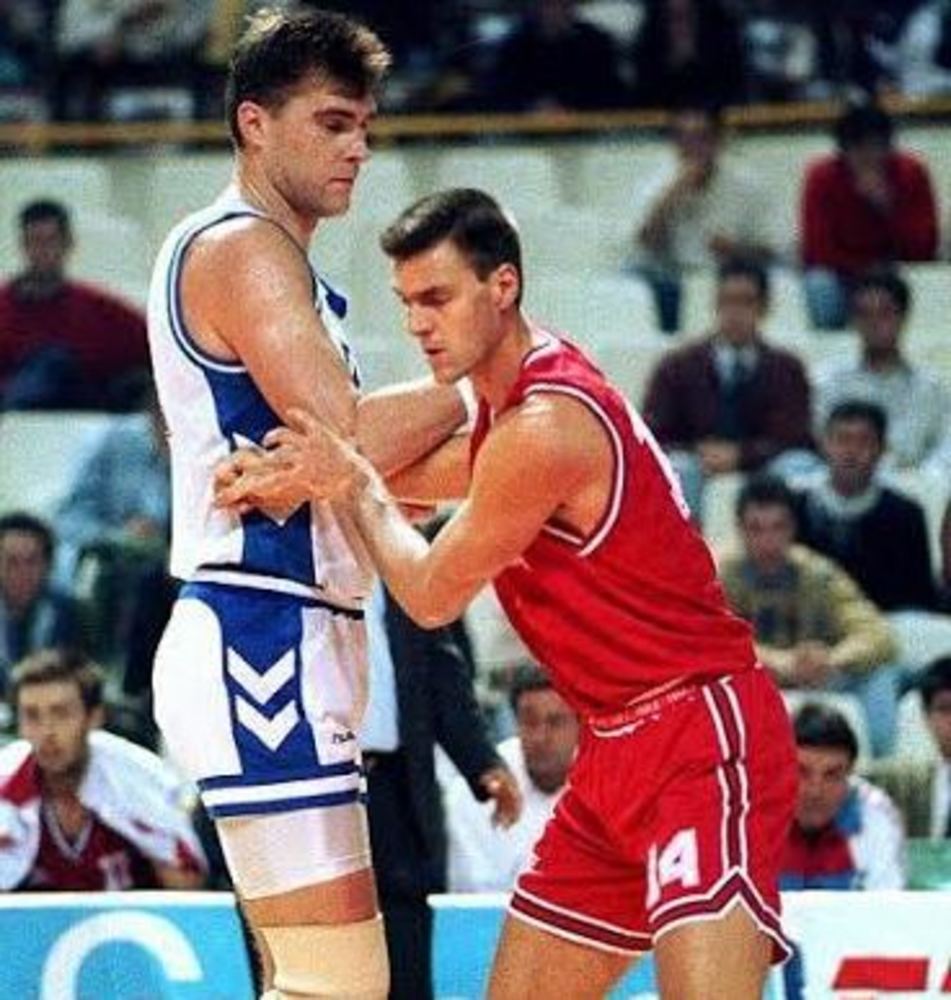 He was light hearted and easy-going off the court. Great competitor on the court. He was usually one of the louder, outgoing guys in the locker room and when we would go out. He had a hearty laugh and was quick to smile.

Roy was a good guy. We had a few laughs for sure! I would say he was a guy who liked to push the envelope a little bit when it came to his lifestyle.

He was a jokester and learned a few good Greek “bad” words to use with teammates when joking around!

He also loved talking about teammates’ clothes and shoes and joked when someone wore something he thought was outdated or funny looking. He liked good and expensive clothes and travelled with suits and ties the time that his teammates used to wear just the team’s training outfit. 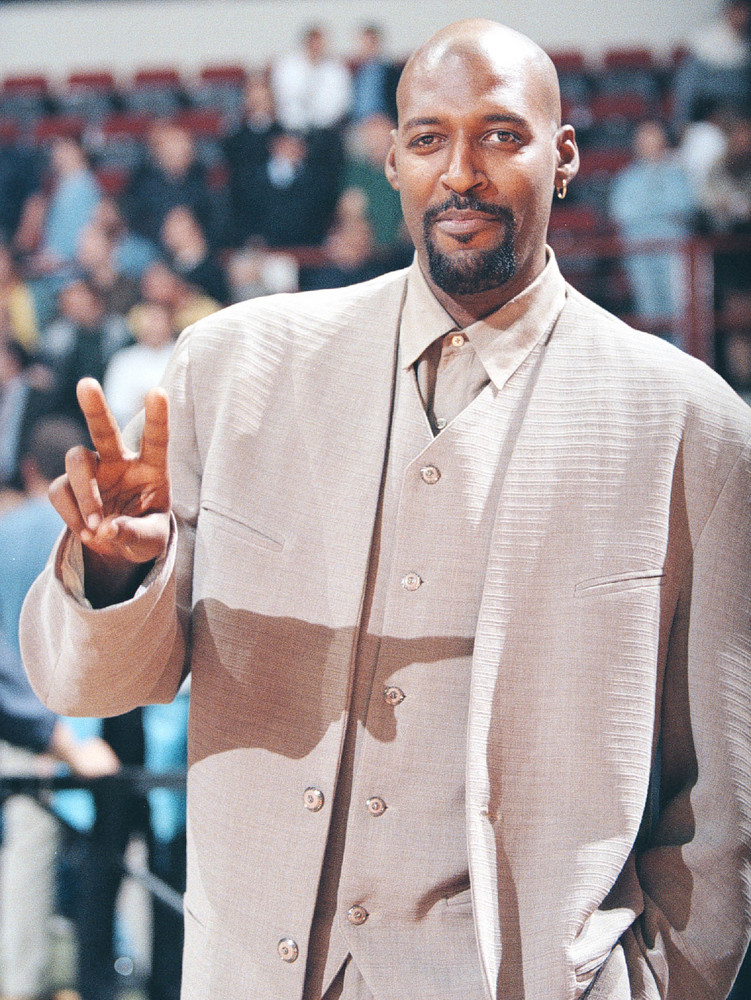 Roy Tarpley in his beloved outfit / Photo by: INTIME.

Roy was a generous guy with teammates and the crowd. He would always strike up conversations with fans and always acknowledged them. He would sometimes use Greek words he had learned (“gia sou”, “kalispera”, “ti kaneis”, “ola kala?”, etc.) with fans.

I remember that as I was recovering from my torn Achilles injury the year we were teammates in the “Reds”, Roy always asked how I was doing with my rehab. And he was excited for me when I returned to the court late in the season.

His first coach in Greece, Steve Yatzoglou, who signed Roy for Aris in 1992, once answered a question about Tarpley’s position on the court. Telling that “Roy is like the bear in the woods. The bear puts its poop wherever it wants. So, Roy plays in whatever position he wants!”.

Roy was the most talented player and rebounder I had ever played with or against. Great competitor on the court. He could shoot, run, finish and rebound all in a big 7 ft. body. He was a “stretch 4” in a “5” man’s body and at that time this was unique, as he was a big who was just as effective away from the basket as he was close to it.

He did it before the modern position-less basketball and the “point-forwards” or the good shooters and passers centers of nowadays.

Otherwise he would have had a long career in the NBA. He won the NBA Sixth Man Of The Year Award in 1988, as a second year player for the Dallas Mavericks! The team that drafted him with the 7th pick in 1986, out of the University of Michigan.

He averaged 13,5 points and 11,8 rebounds in a career-high 81 games that 1987-1988 season. He helped Dallas reach the Western Conference finals, averaging 17,9 points and 12,9 rebounds in 17 Playoffs appearances. The Mavs lost to the eventual-champions Los Angeles Lakers in seven games.

Two arrests for driving while intoxicated and a third violation of the League’s drug-use policies led to his first ban, in 1991…

In Greece, though, I never saw him use illicit drugs. But he liked to drink beer and he could put them back! I think his mind was set on the belief that he needed some assistance from drugs, medication or alcohol to ensure he was always in a good mental state.

Roy missed the NBA as the NBA also missed him. If not for the series of unfortunate events which led to him being banned, I believe he would have had a Hall Of Fame career, because he was extremely talented.

He knew that he should have been playing in the NBA instead of Europe. And I think sometimes that bothered him and other times it motivated him to play better in his overseas career.

In September 2007, he sued the NBA and the Mavericks, alleging they discriminated against him on the basis of his disability as a recovering drug and alcohol abuser. Roy argued his ban should have been lifted because he had successfully completed the one year of drug and alcohol testing the league requested. 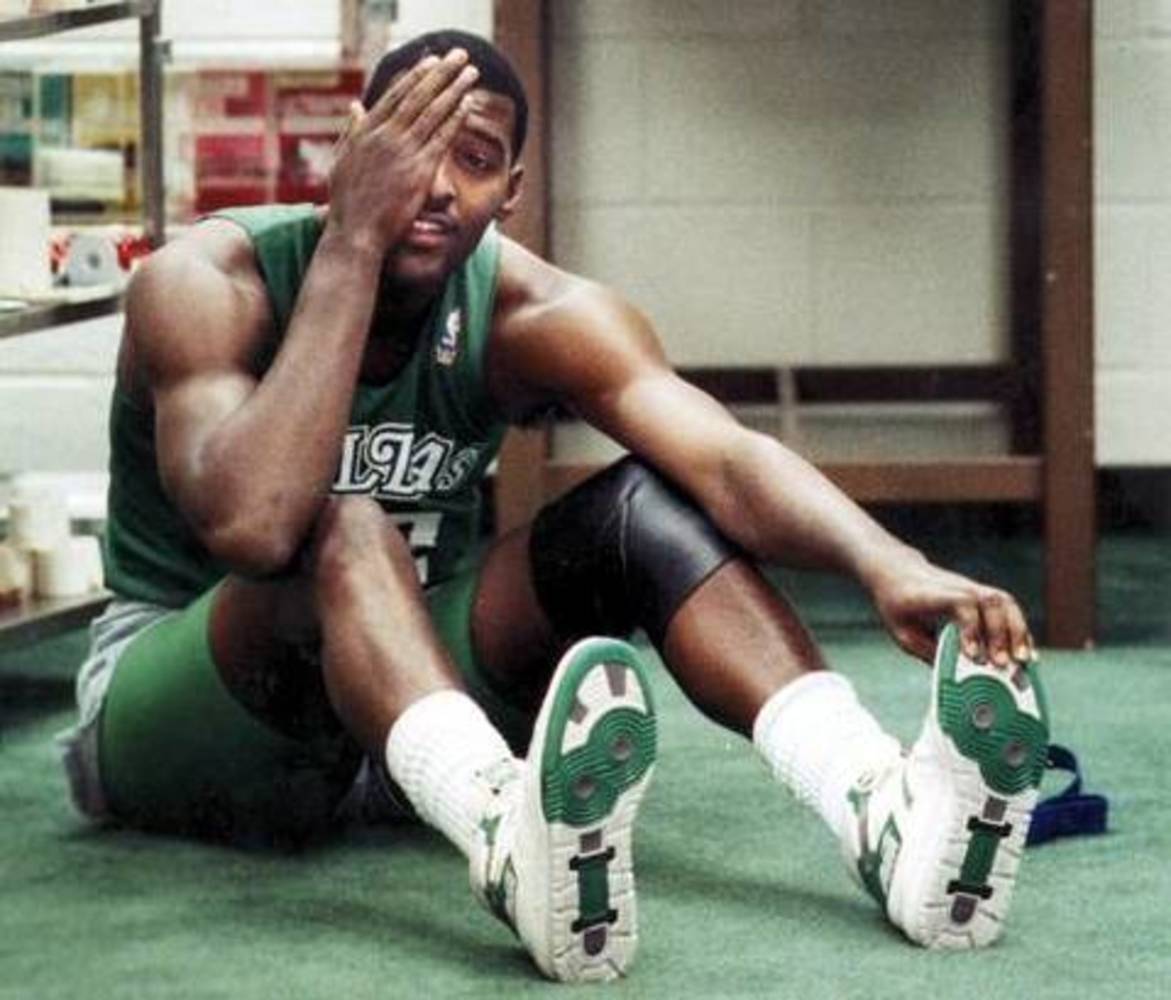 Wearing the green of the Dallas Mavericks.

We hadn’t had the chance to talk in person about his lawsuit. I didn’t hear about that until later on when I read an article on the internet about his case and the settlement.

It’s not easy to discuss personal problems with a teammate or friend, especially when it comes to rehab or addictions. Roy would sometimes mention how much more money he would have had if not for him being banned from the NBA.

He never talked about his rehab or the time he spent in John Lucas’ Treatment Center in Houston, Texas. John Lucas II, a former addict but also an All-Star guard and a head and assistant coach in the NBA for years, created the facility in early 90’s to help professional athletes from the League or the NFL.

Lucas is currently working as a players development coach in the Houston Rockets and the time Roy attended his center, he concluded that “often in the rehab facility’s playground yard there were so talented players, that you thought you were watching an All Star Game!”.

The NBA reinstated him in 1994. He signed a six-year, 22-million dollar contract with the Mavericks, but was permanently banned from the NBA in December 1995 for using alcohol and violating the terms of a court-imposed personal aftercare program.

Despite his wages, he faced a lot of financial problems. He came back to Greece, trying to find a contract even at the age of 40, after he had played for Iraklis Thessaloniki, Esperos Kallithea and Apollon Limassol in Cyprus. In the U.S. they were saying that he was living with a 10-dollar weekly allowance. 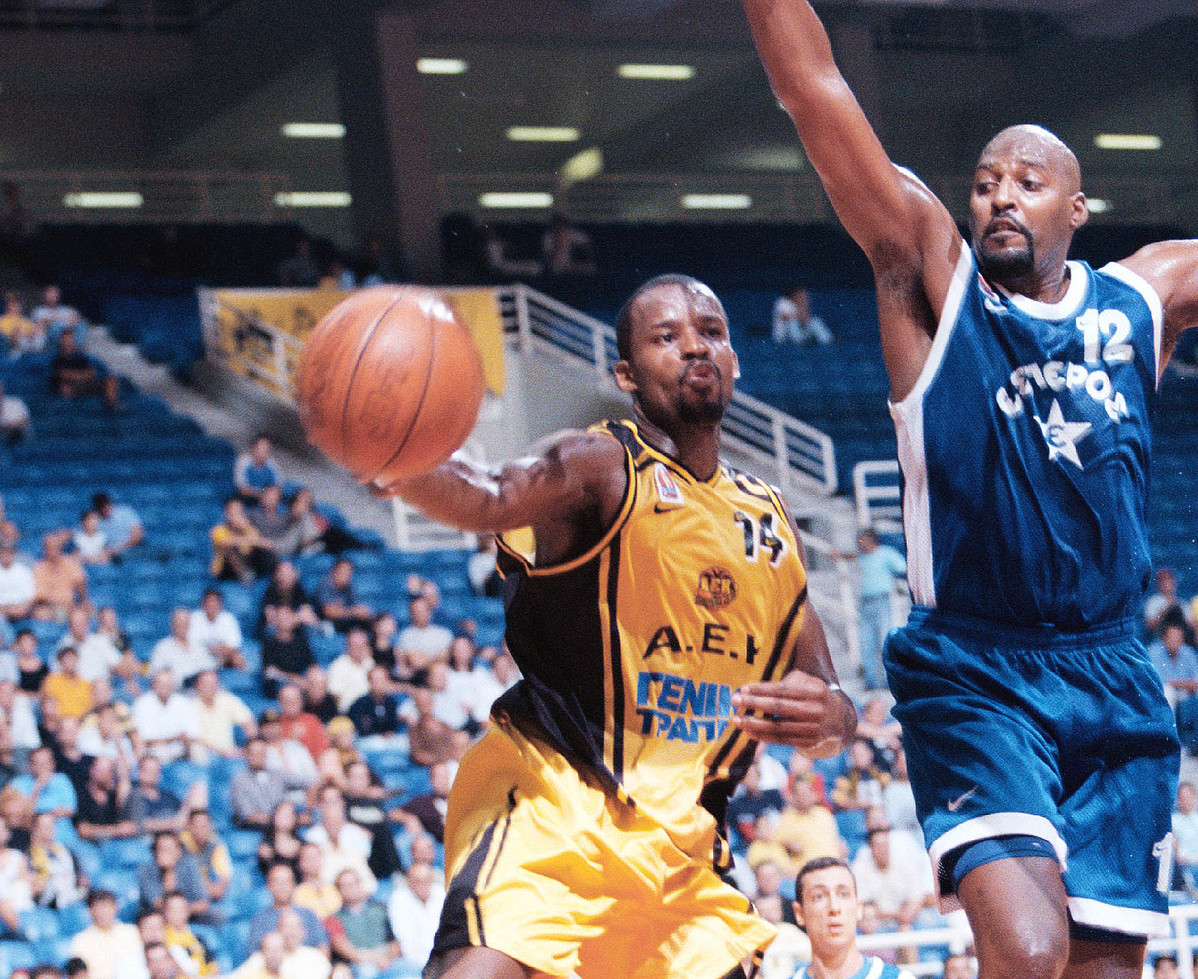 He was looking for money…

I guess there was actually some truth to that, because he called me one day during that time period. He wanted to know if I could “lend” him some money. I said of course and suggested we meet for lunch in Glyfada, where I also gave him the money he asked for.

He was living with a Greek or Cypriot girl and driving his girlfriend’s FIAT Punto. He told me his divorce had left him with very little money and that he was trying to get a contract in Cyprus, or the CBA. He explained that he would leave for the U.S. if Cyprus didn’t work out.

It was the last time I saw him.

Roy liked Greece very much (who doesn’t, right?)! He was generally speaking relaxed and chill off the court.

And the stuff about his mom…

The media reported that he was calm only when his mom was visiting him in Athens. That’s bullshit!

If he was afraid of anyone, it was his wife, Dawn! For instance, she did not allow him to drink or have any alcohol in their house.

Dawn was a sweet girl. Small and cute. But she was a powerhouse despite her size and Roy usually listened to her. 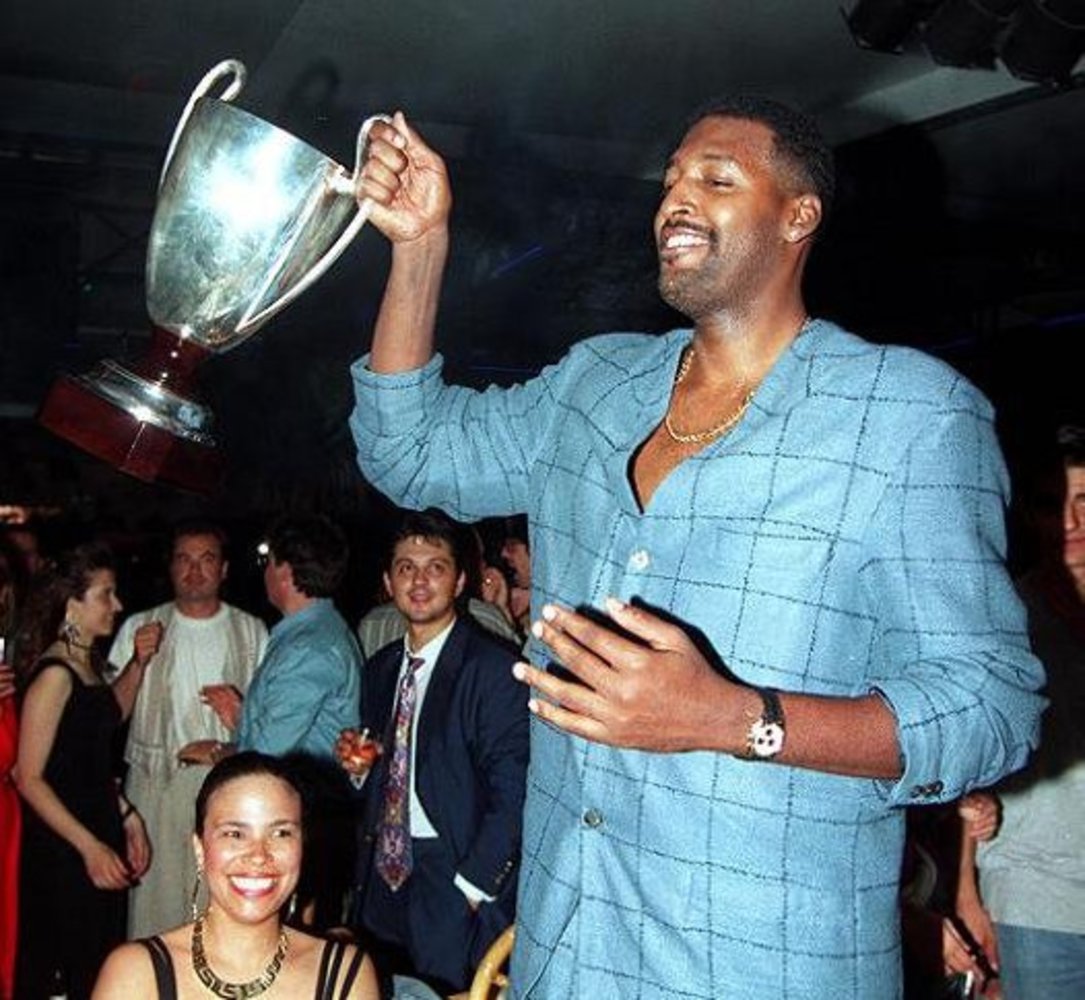 Celebrating the Greek A1 1994 title with Olympiacos.

It is my opinion that addiction is a disease and should be handled the same manner as a disease is handled. For instance, here in Canada, where I live, if a worker tells his employer that he has an addiction (drugs, alcohol, gambling, etc.), then the employer must help the worker and it is against the law to fire him once the addiction is disclosed.

Dr. Kenneth Adams, a professor of psychiatry at University of Michigan (Roy’s college) medical school, pointed many years ago that “addiction, particularly to substance and alcohol, is thought to be a matter of biology, a congenital predisposition”…

But Roy didn’t talk much about his family. He would mention some nice things occasionally about his mom from time to time, but that’s about it.

He was a member of the so-called “cursed 1986 NBA Draft”. Len Bias from Maryland, the #2 pick, died from cocaine overdose two days after he was picked by the Celtics. Drazen Petrovic (#60) lost his life in a car accident in 1993. Addiction problems also hampered the careers of Chris Wasburn (#3) and William Bedford (#6)…

But we didn’t discuss the draft very often. We would talk about college ball only when we discussed our schools, as our universities were big rivals.

Papadakos (No32) of Syracuse against Georgetown’s Patrick Ewing.

As a junior, in his third year at the Michigan Wolverines, he averaged 19 points and 10,9 rebounds.

He won the Big-Ten Conference Player Of The Year Award in 1985 and he was a member of the All-American Third Team in the NCAA the same year. 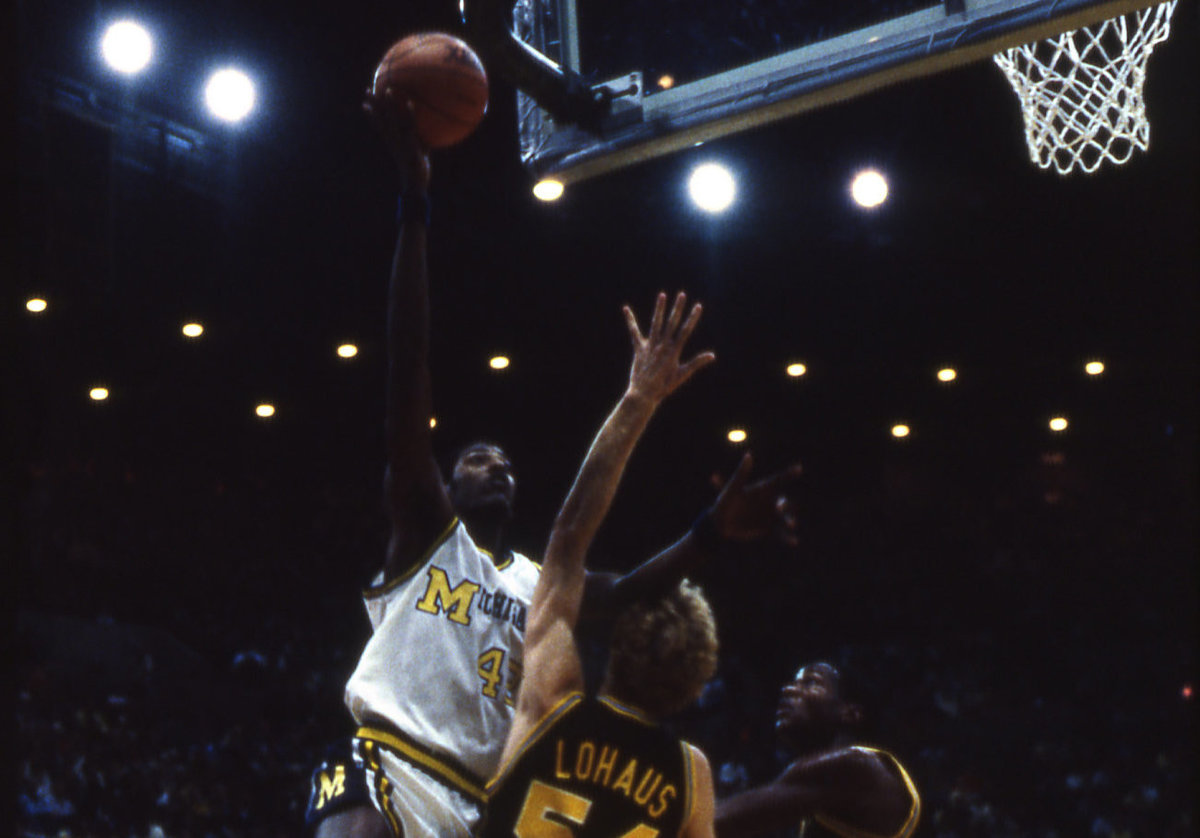 Tarpley in the University of Michigan jersey.

Roy Tarpley wasn’t the typical “gym-rat” player that our coach in Olympiacos, Yiannis Ioannidis, usually preferred to have in his teams.

He didn’t really care for his methods, as Ioannidis was hard-nosed, strict and yelled a lot! Ioannidis was always a little nicer to the foreign players compared to the Greek ones. I believe you don’t really appreciate a coach like him until after you are done playing.

Roy was a very good teammate.

He always made me laugh! Franko Nakic, Roy and I spent some time together off the court as well. Roy liked Franko as they were usually roommates in the hotel before the games and Franko was my closest friend on the team.

I’m pretty sure you all want to read something about the “famous” fight Roy had with our teammate, Babis Papadakis, the night before the European Championship final vs. the Spanish Badalona, at Tel Aviv in 1994.

It was when Papadakis answered a question from coach Ioannidis about players that didn’t play in their usual high level and Babis pointed out Roy!

At the Final Four, some light joking was going at our table at dinner the night after the Panathinaikos semi-final win. At some point, Papadakis said something to Roy jokingly that triggered him, which led to the confrontation and the fight with him the following day.

The English writer, Charles Dickens, wrote that «the saddest thing in life is wasted talent», in his memorable letter to his son. The same quote was used by the actor and screenplay writer Chazz Palminteri, in his role of Sonny LoSpecchio’s character in the 1993 film «A Bronx Tale».

At a place so close to Roy’s birthplace, in New York City.

Roy had quite a life. But a short one, too.

He was a great guy!

He will always have a special place in our hearts.

And he will forever be missed.