Giannis Ioannidis: Win at all costs!

I had just finished my college career in the States and had come back to Greece. I hadn’t decided yet about the Greek team I would play for, when I met the legendary coach Giannis Ioannidis.

We introduced ourselves, he shook my hand and he didn’t waste any time… He was coaching Aris and he told me to come and play for him in Thessaloniki, so we can win many more championships!

It was in the spring of 1988. I saw him first at an event at the ACS School in Athens, where my sister Orthoula was attending. I had not signed with Olympiacos yet. It was the offseason and he was in a good smiley mood.

I decided to play for the “Reds” in Piraeus. But I got the chance to play for Ioannidis three years later, when he left Thessaloniki to become the coach of Olympiacos.

His mentality was crystal clear. He is all about winning at all costs! He will put everything into achieving a winning result. 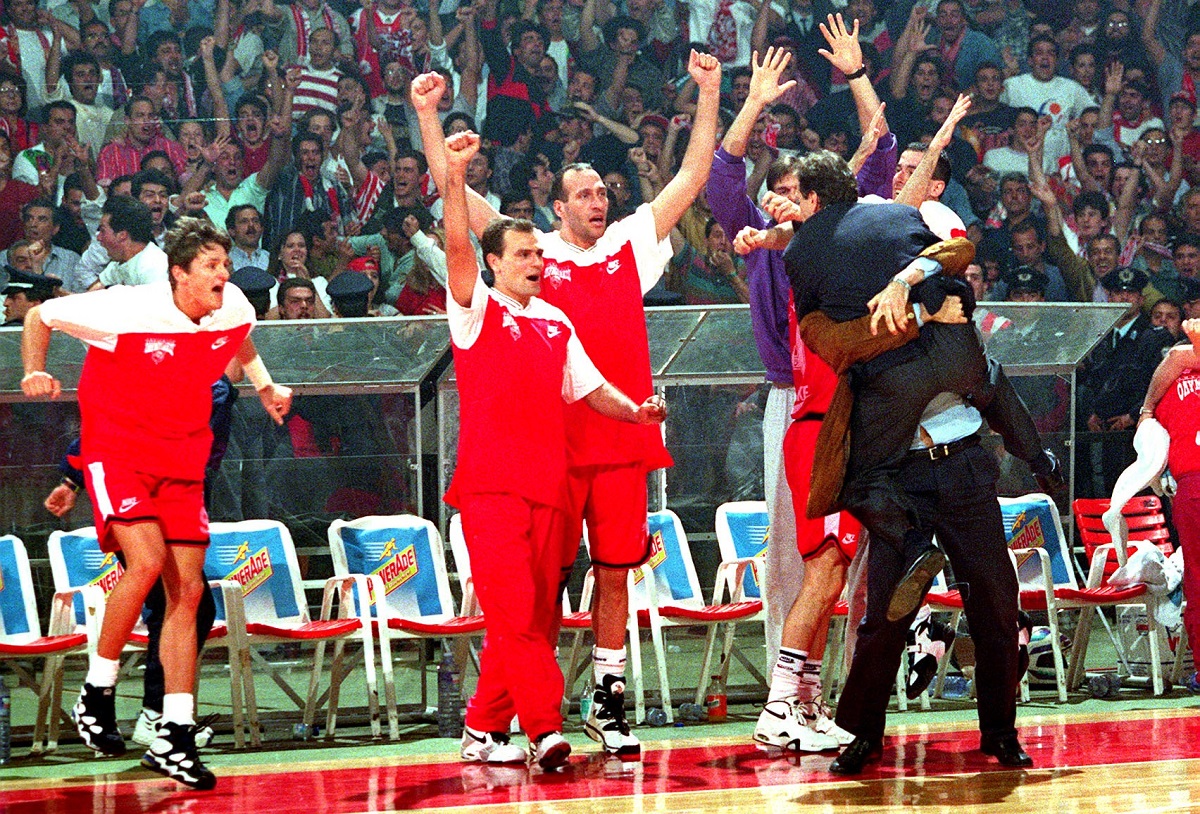 Coach Ioannidis likes to debate, argue and challenge people, and he is very opinionated. He likes to be in the spotlight and wants to be in full control at all times.

He was overly strict, which in my opinion backfired at times.

A coach has to take on many roles depending on the personality of a player and the team, not just the role of disciplinarian or dictator.

A coach has to win the respect of a player and team so that at some point the players want to win for the coach as well as themselves. Most of the players did not care for his strictness and tolerated it because they had to.

He was a good coach that was passionate and driven to win.

He was at every practice, every early morning run, every shoot around and weightlifting session. He was very prepared with game strategy and studied the opponents and opposing players in depth.

He is man that instilled toughness.

His drawbacks were that he relied way too much on superstitions for decisions and that sometimes he would be so mad at timeouts that he would spend most of them yelling at the players instead of giving instructions.

Giannis Ioannidis was a very nervous individual, so by yelling he would transfer some of the nervous energy to the players.

He also wanted to “crush” the player’s psyche through hard practice, as he didn’t trust the players.  His goal was to push us to exhaustion as much as possible, thinking this would make us tougher…

But his basketball mindset was all about winning. He was about empowering everyone involved (players, coaches, support staff) and creating allegiance to him.

His philosophy was that all the players on a team would be successful, famous and make money, as long as the team was successful and kept winning. 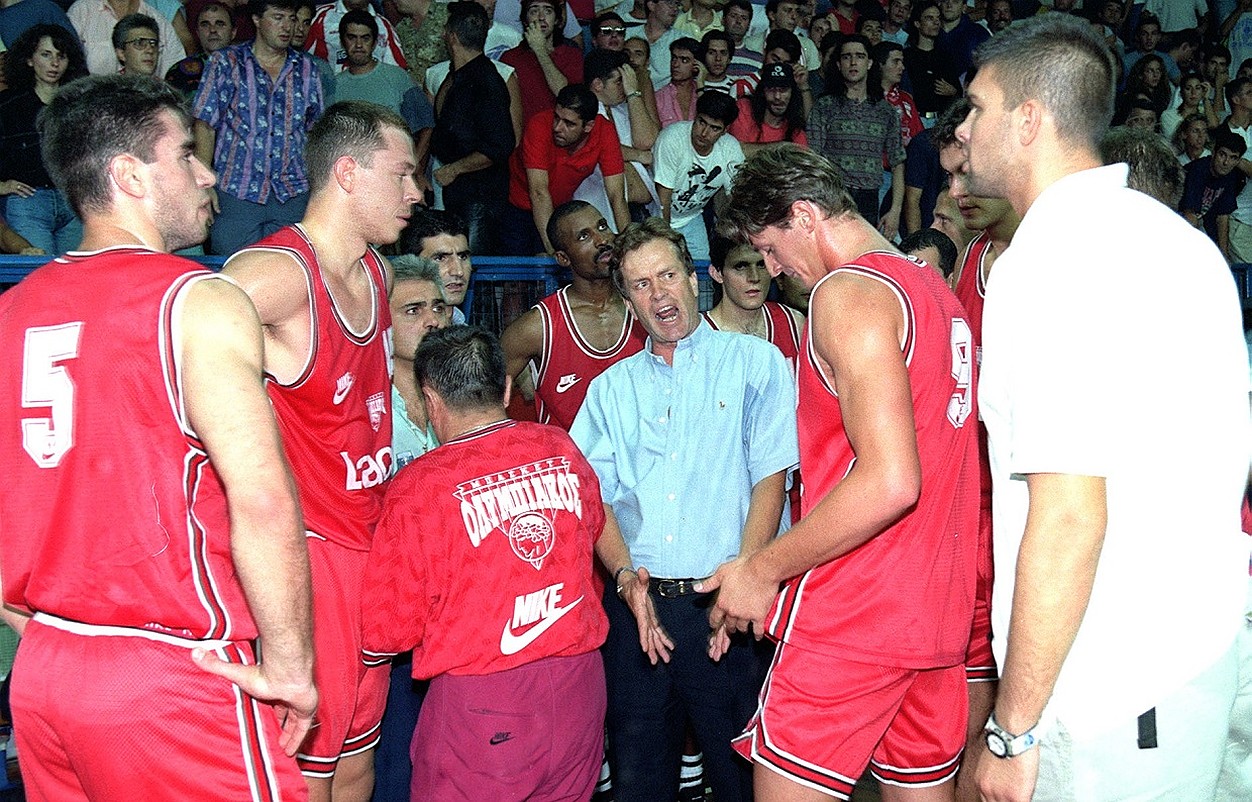 I can’t imagine coaching a professional team while worrying about whether or not I should be changing my practice outfit, or game clothes and shoes.

Or sitting in the same spots and chairs every time, shaking an opponent’s hand with your left hand, or what type of bus was picking the team up and if I was the last person on or off the bus! I just named a few of them…

Players also can get superstitious, but nowhere near the extent I saw and lived with coach Ioannidis. He took superstitions to a new level!

These were thoughts that made him strict. Perhaps more than he should have been.

This was not the case with Ioannidis. He was not interested in grooming any assistants.

He wanted people who he could control and who jumped at his every request. This evidenced by the fact that none of his assistants went on to be head coaches elsewhere…

I got many questions about Ioannidis’ character and how difficult was for him to change as a person.

The answer is “no”. He was set in his ways. His character changed, I guess it softened a little when he was dealing with the American or any other foreign players on our team.

If he was in a good mood, he would smile a lot and would start talking to anyone who would listen.

He would get into deep conversations about life, philosophy, his upbringing and life experiences. This was usually in the off season or pre-season and whenever the team was winning.

You could not talk to him the days after a loss, as his anger did not allow for any conversation! 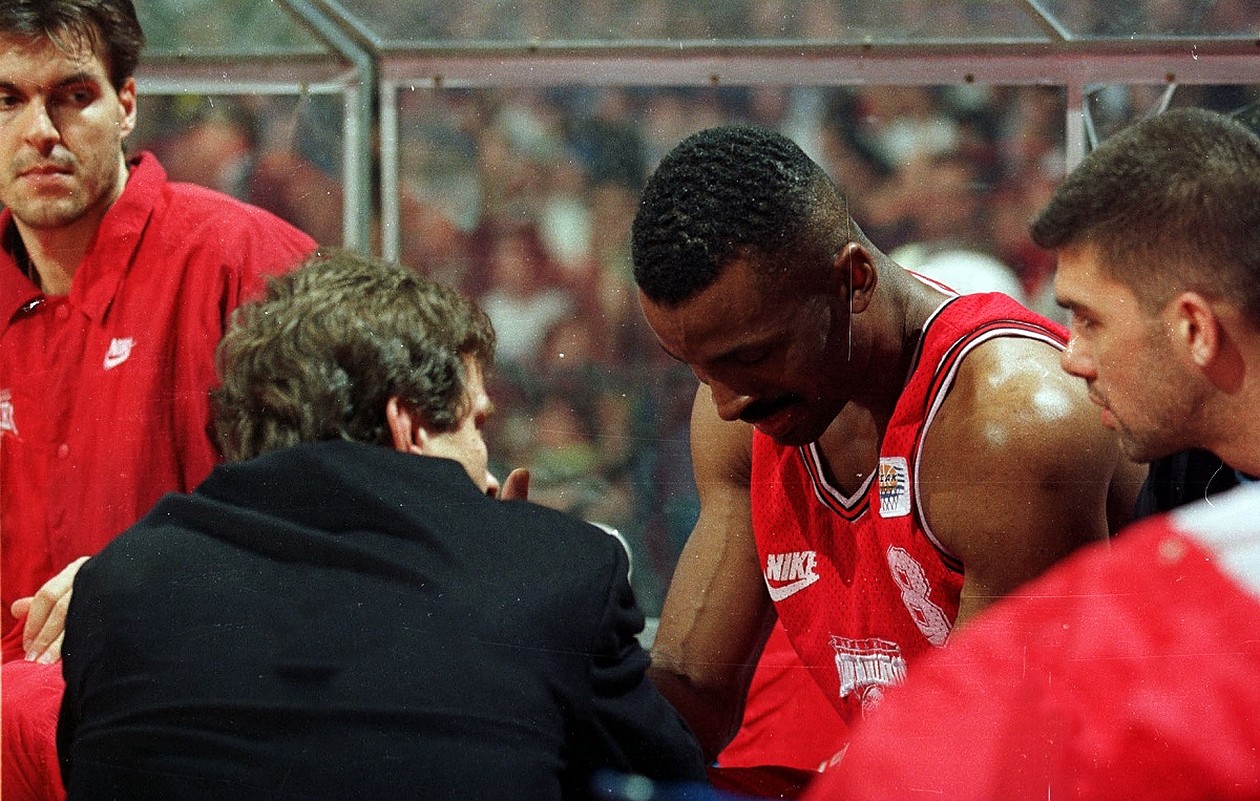 In 1993 I hurt my Achilles… This could be a whole story on its own, but I prefer to keep it to myself.

I was in pain most of that season and that was questioned by some as I played through it. I will say this, though.

He came to the hospital to see me the same day I had surgery and told me “well, I guess you really were hurting, and you really did have an injury after all..”.

There is not enough time or space for locker room stories with Giannis! I guess I will leave those stories for when I publish my tell-all book, which I plan on writing when I turn 100 years old! 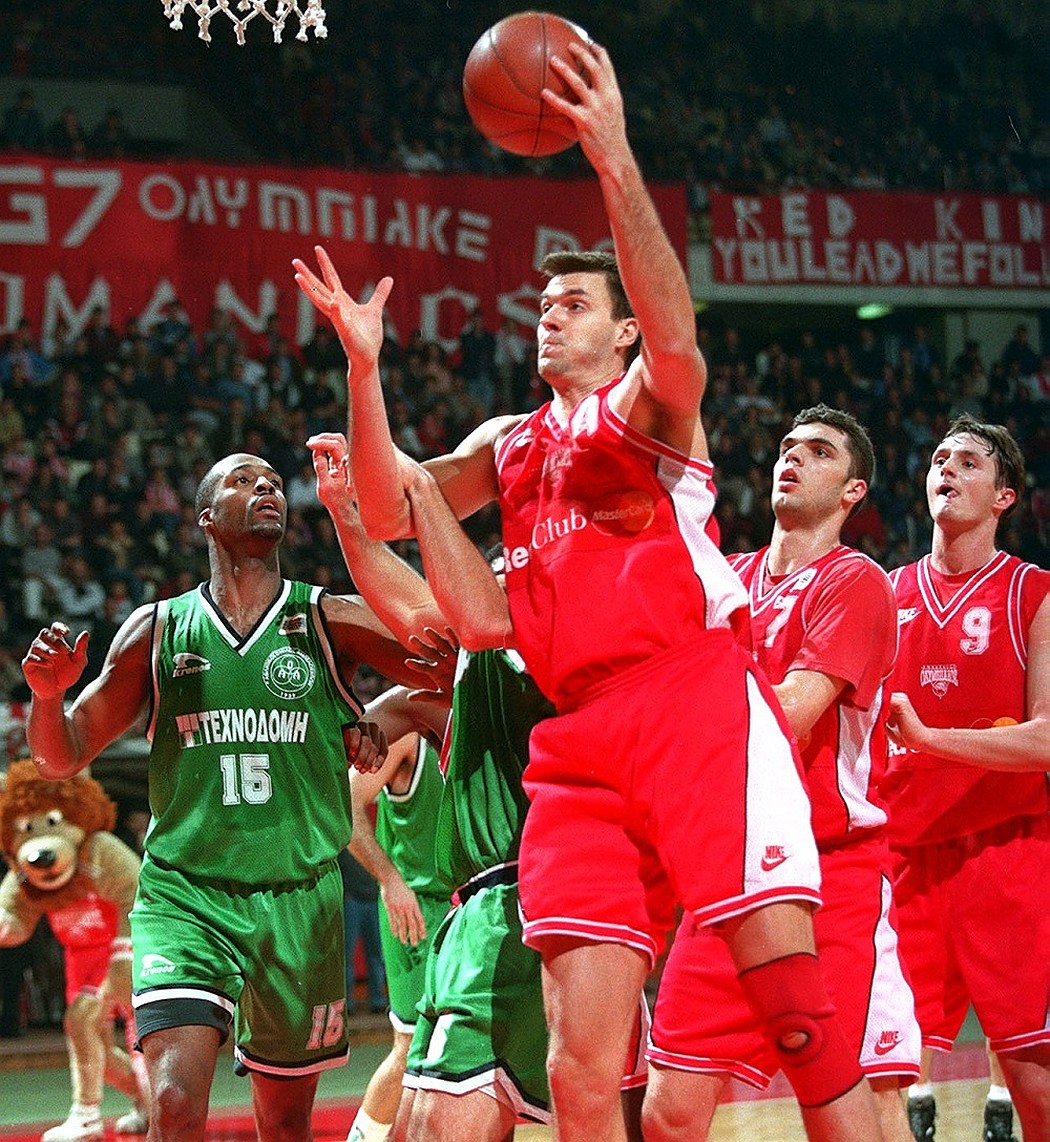 George Papadakos in an Olympiacos game vs. Abelokipi, on December 1995 / Photo by: Eurokinissi (Action Images).

He won almost everything with Aris, but I think that Olympiacos was easily the “most Ioannidis project”.

He was known obviously through his great success with Aris, but when he came to Piraeus and Olympiacos his fame went to another level as soon as the team started to win.

He always wanted “soldiers” in his teams.

But after he left Thessaloniki he turned the “Reds’” basketball program around and helped make Olympiacos a champion in Greek basketball.

It was a team that had his “signature”. I can’t say the same thing for AEK Athens, because he didn’t spend so many years there.

The common situation in all of his works is that he wanted to have total control, no matter if he coached super stars or not. 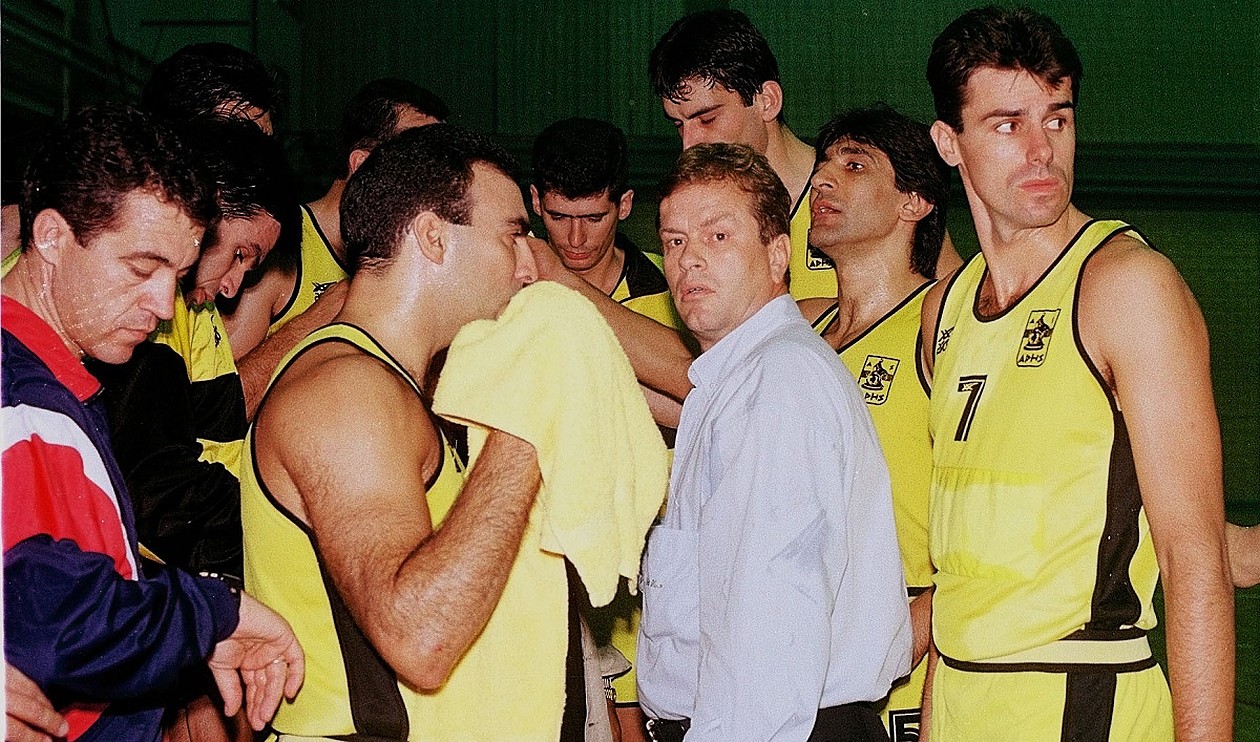 Giannis Ioannidis was a star himself. I guess, after he retired from coaching, going to politics was inevitable.

Many famous people turn to politics. After the success with Olympiacos, he could basically write his own ticket. Olympiacos fans are by far the most influential group of people in Greece both athletically and politically.

Plus, he loves the limelight as we all know, smiling in every chant with his name from the stands.

When I learned that he would run for the Greek Parliament, I always wanted to see the moment where he would grab another party politician by the collar in the heat of the moment!!!

But, of course, he knew better not to let that happen! He just stayed in his yelling to his former players.

I had talked with my former teammate, the late Roy Tarpley and I told him I believe that you don’t really appreciate a coach like Ioannidis until after you are done playing…

Well, quite simply, when he was my coach, there were times when I did not like him very much and sometimes wished I could have punched him in the face!

But as a player you tend to see things from a player’s perspective only.

Once I retired, and even more so as I began to coach, I learned to appreciate his drive, his energy and passion for coaching and his commitment to winning.

Would there be things he did that I would have done differently? Absolutely. But I think that could apply for all of us. As they say “Hindsight is 20/20”. 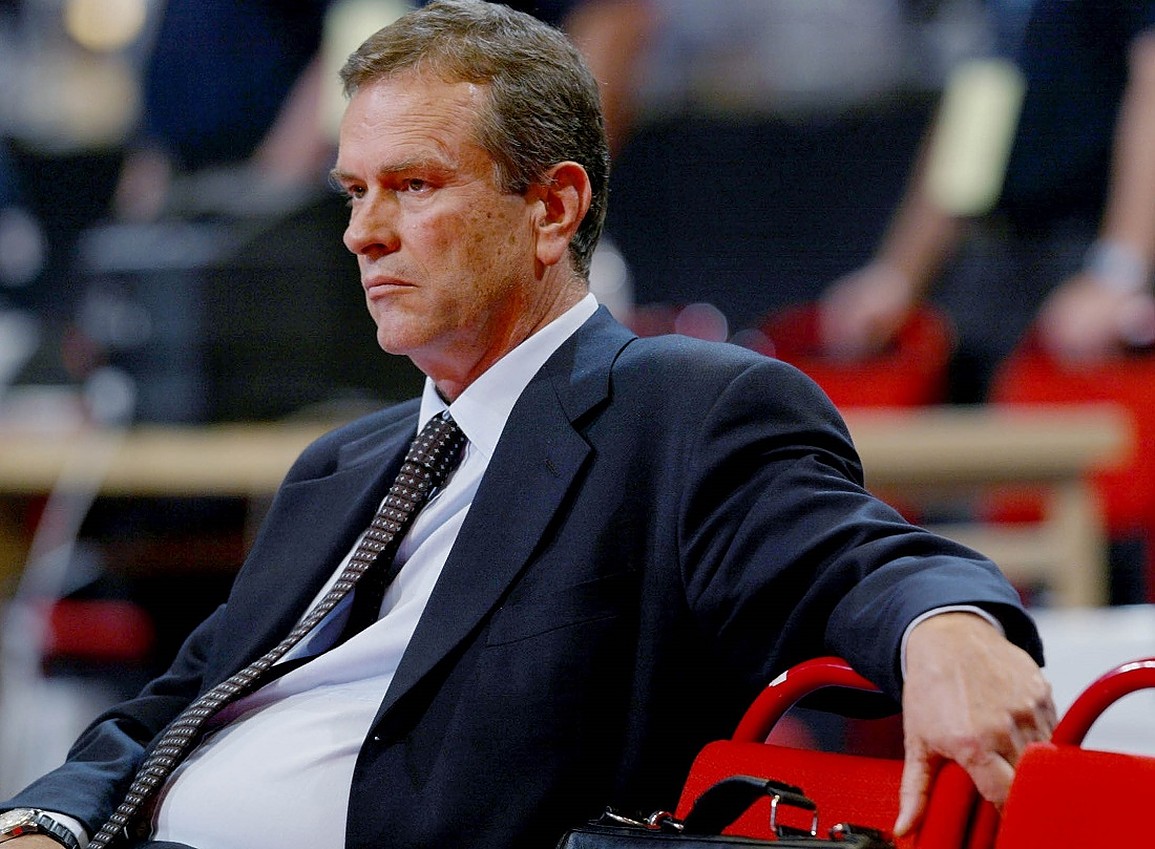 Joe Arlauckas: “The Weekend Of Glory”